Elizabeth Guz’s middle child, Michael, would have been 22 years old in March.

“He had been anxious and depressed for a long time,” Guz said. “I knew something was wrong, and it became worse as an adolescent. He had been to a therapist and psychologist, and it was very frustrating. He started self-medicating, and ended up overdosing.”

Michael was only 17, just finishing his junior year at Groves High School, when years of struggle with bipolar disorder came to an end in 2009. Later that year, the Guz family formed the Michael Guz Memorial Fund at the University of Michigan Depression Center, as well as Ella Designs Jewelry. The jewelry business works with her son’s fund, donating half of the profits and all donations to the fund to the Heinz C. Prechter Bipolar Research Fund. 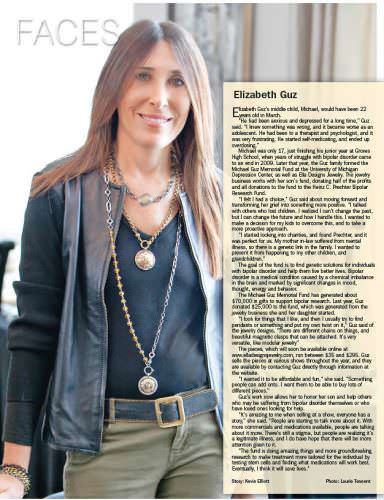 Stay Up to Date!

Ella in the News